Engineers appear to be fixated on soil bearing capacity as the fundamental soil parameter for foundation design worldwide, with the assumption that the footing will behave as a rigid body. This assumption is usually not applicable for large and multi-column foundations, and in such conditions, engineers prefer flexible analysis using numerous available software. These computer programs often ask for an input parameter known as the “modulus of subgrade reaction”.

The ks value can be determined by field tests or by correlation with other tests. There is no direct laboratory procedure for determining the ks value.

1.1 Empirical Method
Research has shown that ks can be correlated with soil properties; however, these correlations have shown a wide range of ks. For example, Bowles (1996) established a relationship between allowable bearing capacity and modulus of subgrade reaction (ks) per Equation 2.

Similarly, Lin et al., (1998) demonstrated that the value of the coefficient of subgrade reaction ks could be estimated per Equation 3.

Equations 2 and 3 have shown significant variation in subgrade reaction values in practice.

A common method of determining ks value of subgrade is the insitu plate load test. This test involves the application of pressure on a steel bearing plate into the ground surface measured with a hydraulic jack and the corresponding surface settlement recorded from dial micrometres on the plate surface, and the modulus of subgrade reaction determined using equation 1.

The traditional plate load test setup is illustrated in Figure 1. 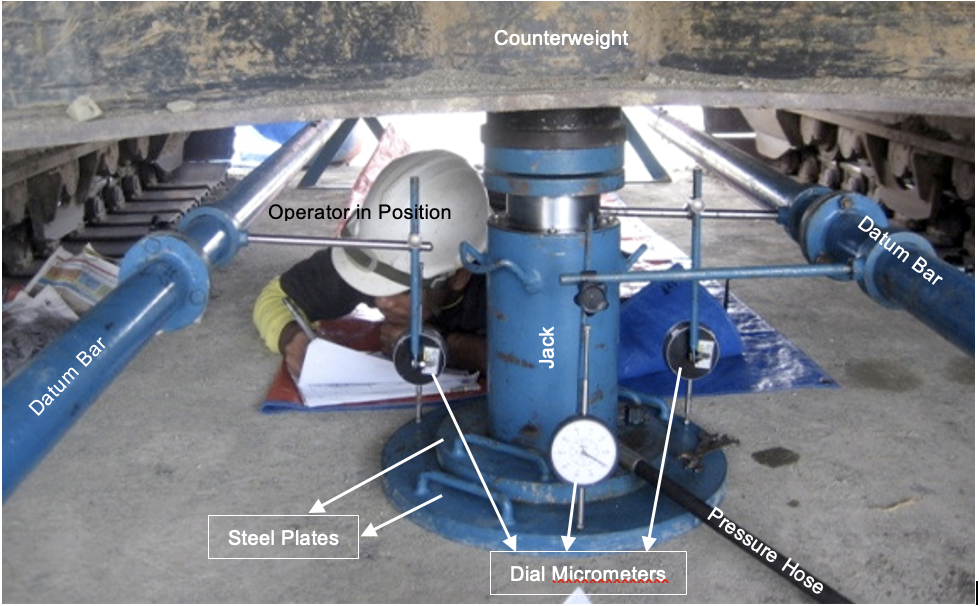 This traditional plate load test method is plagued with the following:

1.3 AX01 Plate Load Test
To overcome the above limitations, an improved plate load test kit to provide a more reliable, improved safety, and repeatable test, known as the AX01 Plate Load Test, was used by Qualtest to investigate the modulus of subgrade reaction for a client. This instrumented Plate Load Test AX01 meets the DIN 18134 and ASTM 1195 / ASTM 1196 standards.

The AX01 Plate Load Test is an automated system that eliminates the intricacies of the traditional plate load test equipment and is a one person operation. The technology enables the acquisition of field data by electrical means, including data processing and presentation of results, hence eliminating human error.

Qualtest used their AX01 Plate Load Test equipment to determine the modulus of subgrade reaction for their client in Murrumba Downs, Queensland. In this test, compressive stress was applied to the soil layer through a 300mm diameter rigid plate, and the deflections were measured for different values of stress electronically.

The plate load test permits the relationship between load and settlement (load-settlement curve) to be determined.

The electronics of the AX01 automatically calculated and reported the modulus of subgrade reaction at the tested locations.

The determination of the ultimate and allowable bearing pressure of soils using the automated AX01 Plate Load Test is another topic for another day.