The options for the GRIZZLY® Dynamic Probing Super Heavy (DPSH) include:

Traditional DPSH rigs are most suited to deep tests and when medium to very high consistency layers are present. The DPSH is particularly suitable for soils having a cone resistance value from 3 to 60 MPa (SPT blow number equivalent: 6 < N < 100). It is not recommended for the characterization of loose, soft soil and/or saturated sands, silts and clays. In very soft soils, one blow can result in the tip of the cone penetrating into the soil 200 mm or even more, resulting in loss of resolution, reliability and accuracy. However, these soft soil strata are of particular interest to geotechnical engineers and reliable measurements are necessary in order to accurately characterize them.

Sol Solution has succeeded in solving this problem, enabling a heavy dynamic penetrometer to provide fine measurements in soft or very soft soils and to automatically adapt to the resistance of the soils encountered during the test. The Variable Energy option converts the GRIZZLY® from a constant dynamic energy penetrometer (DPSH) into a Variable Energy version.

The GRIZZLY® is the first in the world to offer this performance with full automation.

The Variable Energy GRIZZLY® is equipped with a series of sensors and electromagnetic systems to provide multiple energies (DPL, DPM, DPH and DPSH) by varying the drop height whilst maintaining the same hammering mass.

The on-board computer adjusts the driving energy for each blow by modifying the drop height of the mass based on the penetration of the previous blow. Hence, maintaining a constant energy/settlement ratio throughout the test. The drive energy is adjusted for each blow and it is based on variations of the drop height of the mass controlled automatically by the on-board computer.

Adjustments to the driving energy are applied to achieve a penetration per blow between 2 to 20 mm. The more variations of soils resistance there are, the more frequent will be the energy changes. No intervention of the operator is required during the test.

You can set-up the GRIZZLY® in automatic:

Alternatively, you can choose to work in manual mode, and define manually the falling heights.

The geotechnical drilling head is a fully integrated attachment that allows the GRIZZLY® to be turned immediately from a Dynamic Probing Super Heavy (DPSH) into a geotechnical drilling rig with a 63mm helical auger suitable for soil investigation. Depths of 10-15m or more can be achieved, depending on the soil type.

Windowless push tube sampling is a technique used to bore through shallow soft soils to investigate the substrata in order to gain a profile of the ground conditions and to facilitate soil sampling for chemical and geotechnical analysis. Windowless push tube sampling can be used for the investigation of contaminated land, for geotechnical investigations and for the installation of ground gas and ground water monitoring wells.

The Standard Penetration Test (SPT) is an in-situ dynamic penetration test designed to provide information on the geotechnical engineering properties of soil. The main purpose of the test is to p 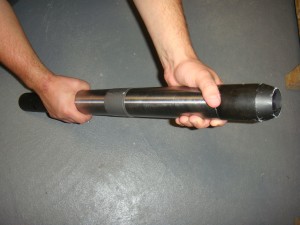 rovide an indication of the relative density of granular deposits, such as sands and gravels from which it is virtually impossible to obtain undisturbed samples.

To get the SPT values (no data acquisition on the GRIZZLY® for this special application), the operator just has to note the number of blows each 150 mm or 300 mm. The sample tube is driven 150 mm into the ground and then the number of blows needed for the tube to penetrate each 150 mm up to a depth of 450 mm is recorded. The sum of the number of blows required for the second and third 150mm’s of penetration is termed the “standard penetration resistance” or the “N-value”. In cases where 50 blows are insufficient to advance it through a 150 mm interval the penetration after 50 blows is recorded. The blow count provides an indication of the density of the ground. The GRIZZLY® Standard Penetration Test (SPT) procedure meets NF P94-116 – Soil investigation and trials – Standard Penetration Test (SPT), EN ISO 22476-3 – Geotechnical investigation and testing — Field testing — Part 3: Standard penetration test, ASTM D1586 and Australian Standards AS 1289.6.3.1.

The torque wrench is used to measure the lateral friction between the material being tested and the rod stem to identify whether the torque (Nm) is within the acceptable limits, defined by the standards NF XP P94-063 for control compaction and NF P94-115 for soil investigation.

The torque, measured before each additional 1 m rod is added, can be entered into the GRIZZLY® software and printing on the penetrograms.