PANDA® DCP – How it Works

Both the PANDA® Instrumented Variable Energy DCP and the Automatic Hammer are covered here.

The PANDA® Instrumented Variable Energy DCP is a light-weight (total weight of equipment 18.5kg) dynamic cone penetrometer (DCP), which uses variable energy and can be operated by one man to test soils in almost any location to a depth of 6 metres.

The test is carried out by driving a cone (2, 4 or 10cm2) on the end of a set of rods using a fixed weight hammer. For each blow of the hammer, the strain gauges measure of impact force of the hammer while the depth of penetration is measured by a retractable belt. The microprocessor uses the depth of penetration and energy for each blow of the hammer to calculate the dynamic cone resistance (qd) using the Dutch Formula (Cassan M. 1988) and records and displays the values for qd along with the corresponding depth. The Dutch formula is shown in the figure.

Studies have proved the reliability of the results obtained compared with standard in situ tests.

The operator can apply a different amount of energy for each blow of the hammer, hence the term variable energy DCP. This is particularly useful in soft material like mine tailings because softer blows can be carried out and this means that a greater level of granularity of the results can be achieved.

Following the on-site tests, all data recorded by the PANDA® is downloaded to WebSprint©, the cloud based software for storing, processing and interpreting your geotechnical data. The Anvil
This part of the device is where strain gauges are built in to record strike effort from hammer blow. It is connected to the central acquisition unit by a transmission cable and a retractable measurement ribbon. The anvil sits over the rods used for ground penetration, and is repeatedly struck by the operator using a balanced hammer. Each time the anvil is hit, the relevant resistance is displayed on the Dialogue Terminal in MPa values. This is reached by strain gauges recording weight and velocity of hammer in conjunction of distance travelled through materials.

The device can be pre-set to provide an audible signal once a desired depth has been achieved and will allow the operator to cease immediately. If any object is encountered through penetration process the device will provide an audible alarm to inform the operative not to proceed further. Additional rods can be added at any time through the process, and can record readings from up to 6m in depth where conditions allow. 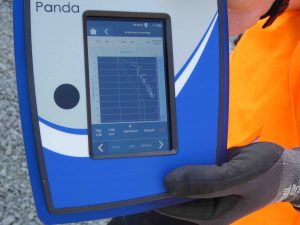 The Dialogue Terminal (DT)
This part of the device is where the operative can input and extract data in relation to relevant site or sounding. Data such as client information, site conditions, material, classification, and comments are easily loaded along with ability to set required maximum depth if required. Once this pre-set depth is achieved an audible warning will be heard along with a visual flashing of the screen.

This is connected to the Central Acquisitions Unit (CAU) via a serial cable which allows information to be displayed on the screen with each strike. The strike information is shown in large text format to allow the operative to clearly see the following information: 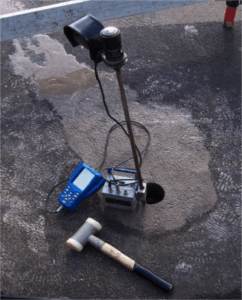 A pre drilling depth can also be entered where hard surfaces have been removed as a result of a trial hole or core drilling where the CAU cannot sit on material surface. This will also allow for surface datum from where all depths are measured. Information for each sounding can be called up for display on the screen along with a table of strike results and a resistance graph known as a penetrograph. The device has a memory capable of holding hundreds of results before upload, and will maintain these results until the operative removes them. 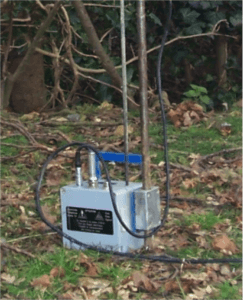 The Central Acquisitions Unit (CAU)
The critical information for each sounding is returned from this unit in relation to overall depth, resistance, and strike distance. Information sent from the anvil passes through this unit where it is processed and sent on to the dialogue terminal. The DT will not allow a sounding to take place unless successful connection and data input has been achieved. Each sounding usually starts with 1m of rod length which can be added to in 500mm sections. A retractable reinforced measurement ribbon is connected to the underside of the anvil which will record each strike depth and total distance travelled through penetration.

For deep or repetitive tests, the automatic hammer alternative is available as an alternative to using the 1.7kg hammer. The Automatic Hammer can also be operated by one person. Prior to or during a test with the PANDA® probe, you can switch from manual hammering to automatic hammering. The Automatic Hammer is safe, easy to use and need a minimum amount of maintenance.

The PANDA® probe measures the energy exerted to the system with each blow.

After scouring the market, we settled on the PANDA DCP test equipment as it offered the technical capability and, moreover, the flexibility required to work in the restricted environment our project presented; overhead clearance typically at 1500mm but as low as 1200mm.  We had a unique problem that required a unique solution and that’s precisely what we found through the team at InsituTest and the PANDA equipment.  The ease of assembly, intuitive operability and compact nature of the equipment, made light of the numerous soundings we required across a widely dispersed area.

We purchased a PANDA 2 machine after using one from another laboratory. The information obtained has saved money on numerous jobs. It is reasonably priced and the after-market service has been great. Highly recommend using Insitu Test.

The PANDA probe is giving us and the construction team very useful insight with immediate feedback on the compaction being achieved on a major new rail construction project in QLD. We have two teams working daily using PANDA DCP’s and the Automatic Hammer on the rail formation, enabling real time decision making with confidence, based on the highly repeatable results.

I felt the training was very thorough. If anyone doesn’t know how to use a PANDA after that session, they shouldn’t be using one at all.

We have found the PANDA to be an invaluable acquisition to our company, using it on projects ranging from Remote Community Housing in Central Australia to a NASA Rocket Launch Facility in Arnhem Land, NT.