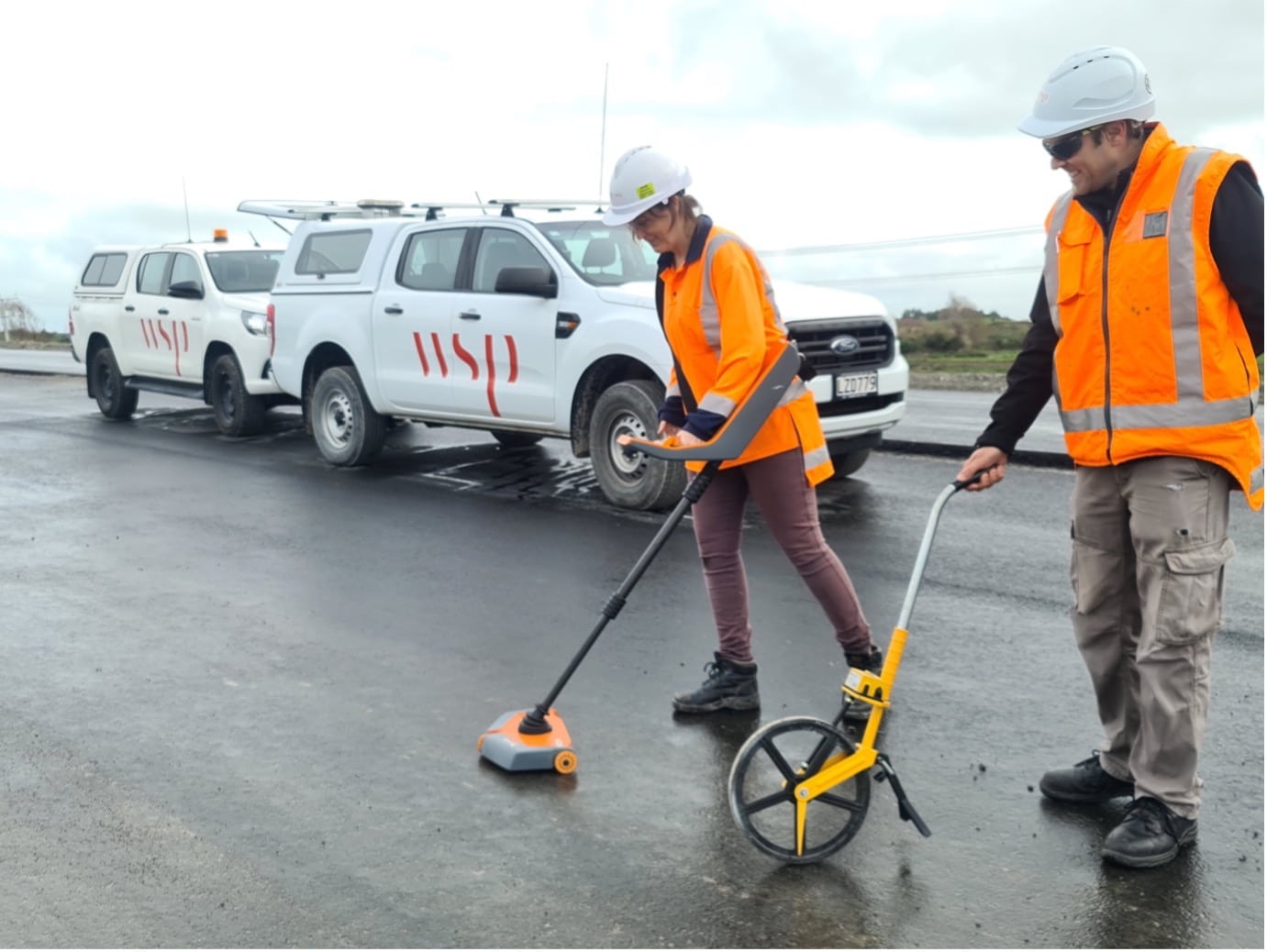 These requirements and the accuracy needed led them to the MIT-SCAN-T3, an NDT device.

The project was a 12 km long 4 lane expressway with a structural asphalt pavement. WSP’s role was acting as the client representative, for the Waka Kotahi NZ Transport Agency, ensuring complying quality was being achieved.

In this case, WSP used both the 300mm and 120mm diameter aluminium reflectors. This gave them more flexibility with regard to when they were able to access the site.

The pavement structure was made up of the following:

Ideally, where they could get in early enough, they placed the 300mm diameter reflectors and measured the three successive layers of asphalt. The finish of the stabilised AP65 subbase was often uneven and made attaching the 300mm diameter reflectors difficult. Occasionally construction activities dislodged some of the reflectors before they could be paved over. WSP designed and 3D printed dowels that were glued to the bottom of the reflector and anchor fixed into the stabilised granular pavement. This significantly reduced the amount of glue required to hold the reflectors and almost completely eliminated the loss of reflectors caused by construction activities.

WSP have since found a supply of off the shelf dowels and are currently using the larger of the two shown in the photograph below.

In section across the pavement, the initial thinking was to place reflectors in the middle and outer edges of each paving run. With reflectors placed at 40m cross section intervals it was too difficult to place and maintain seven reflectors so the layout was changed to placing a reflector near the middle of each run reducing the number of reflectors to three for each cross section. The general layout configuration is shown in the following diagram.

In the locations where the 300mm reflectors were dislodged, WSP used the 120mm diameter reflectors, placed on top of the AC20 layer and were able to measure the thickness of the AC14 layer and then the Epoxy Modified Open Graded Porous Asphalt (EMOGPA) wearing surface.

To provide greater coverage of the EMOGPA wearing surface thickness, 70mm reflectors were placed on top of the AC14 on cross-sections between the 300mm reflectors. This provided thickness measurements at 20m intervals.

The MIT-SCAN-T3 enables the quick location of the reflectors and then, the GPS located time stamped asphalt thickness reading is taken and recorded electronically. Data is transferred to the phone or tablet based MIT-SCAN-T3-APP, which enables you to:

Data can also be transferred to the PC-based MIT-Project-Software for data storage, presentation and geo-positioning of results.

The benefit of using the MIT-SCAN-T3 compared with traditional layer thickness measurement is that a very comprehensive coverage of asphalt thickness can be produced without cutting any core holes in the asphalt.

Other significant benefits of using the MIT-SCAN-T3 is the saving in time, personnel, and equipment to compile the layer thickness results.

The personnel saving is that the scanning can be completed quickly and efficiently by one person using the MIT-SCAN-T3. Coring would take much longer and would generally require two Laboratory technicians to complete the coring safely.