The PANDOSCOPE® is a coupling of the PANDA® Instrumented Dynamic Cone Penetrometer (DCP) (tip resistance vs depth profile) and Geoendoscopy (imagery from down boreholes) combined with sophisticated data presentation and analysis software.

The PANDA® Instrumented Dyamic Cone Penetrometer (DCP) involves driving a variable energy cone penetration device into the rail track substructure to collect the strength (and modulus by correlation) profile with depth. Condition monitoring of the rail track substructure layers is accomplished through insertion of a camera into the same hole, also called Geoendoscopy. The combined system is referred to as the PANDOSCOPE®. The PANDA®, PANDOSCOPE® and Geoendoscopy are all systems developed by Sol Solution. Once the PANDOSCOPE® data has been processed, the results can be presented.

The right hand chart shows the Penetrogram of the PANDA® cone resistance according to depth. The left hand window shows the stratigraphy of the track layers (thickness, nature and hydrous state). The degree of ballast fouling is clearly visible, even if there if there is no distinct interface between clean and fouled ballast. 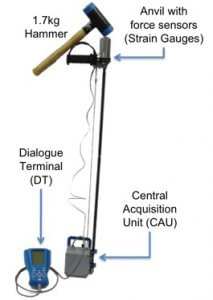 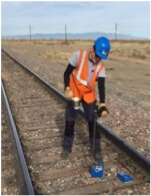 The PANDA® test is an instrumented variable energy dynamic penetration test. The tests consists of driving a set of steel rods equipped with a conical tip of 2cm2 cross-section through the material by hammering an Anvil with a standardised hammer. At each hammer blow, the energy is measured in the anvil with strain gauges.

Sensors measure simultaneously the settlement or vertical displacement of the cone. All the data is transmitted to the Central Acquisition Unit. The results are displayed immediately on the Dialogue Terminal as penetrograms, graphs that show the evolution of cone resistance according to depth.

For each blow, the depth of penetration and the driving variable energy are measured to calculate the dynamic cone resistance (qd) with the corresponding depth using the Dutch Formula, shown in this figure.

The PANDA® collects mechanical information including cone resistance (direct measurement) or CBR or other parameters with correlations. This is presented in graphical format, knows as a penetrogram.

The PANDA® is a versatile equipment with a total weight less than 20 Kg. Within the framework of the railway use, adaptations have been made to make it even lighter and tougher. 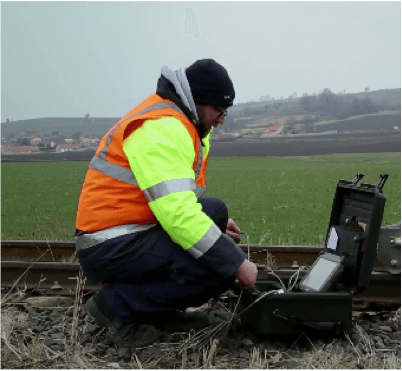 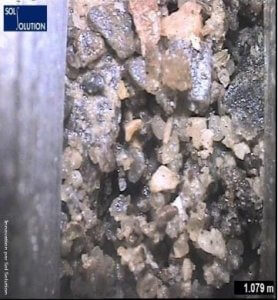 The Geoendoscopy test uses a tiny video camera (wired to a data logger with a soft cable) to observe the soil. The camera is introduced into the hole of a previously performed PANDA® DCP test (15 mm of diameter). The collection of imagery from down the hole allows a qualitative characterisation of soil.

In the railway application, it enables condition monitoring of the railway track substructure layers. The layer characterisation for ballast and subgrade includes layer identification, layer thickness, water content (qualitative), condition (ballast fouling) and even the estimation of the soil grain size distribution.

Rail tracks are positioned on railway ballast, a granular material, generally comprises large, angular particles of typical size ranging between 25 and 50 mm. The main functions of railway ballast are:

The maintenance costs of ballasted tracks can be significantly reduced if an accurate estimation of the different types and degree of fouling materials can be related to track drainage.